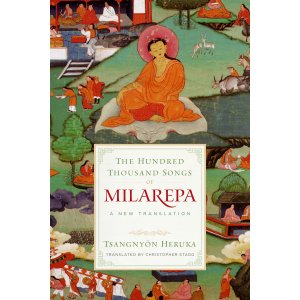 Milarepa, the famous Tibetan yogi, lives on through his joyous, instructional songs and poetry. Both the new translation of The Hundred Thousand Songs of Milarepa, from Christopher Stagg, and Chögyam Trungpa Rinpoche’s exploration of his life in Milarepa: Lessons from the Life & Songs of Tibet’s Great Yogi bring new light to the resonance Milarepa’s story still carries centuries later.

Milarepa is remembered for his remarkable determination and personal growth. His inspiring story traces the very familiar, human progression from confusion to clarity. Early in his life, Milarepa came to understand tenants of both privilege and oppression. Though born to a wealthy family, the death of Milarepa’s father left him and his mother at the mercy of his aunt and uncle, who put them to work as servants for their own family. At his mother’s request, Milarepa studied the craft of black magic to be better able to retaliate against their cruelty. Not only was he successful in mastering these magical abilities, he promptly used his skills to take the lives of his aunt and uncle’s entire family. In this way, Milarepa had invited an immense amount of negative karma into his life as a young adult. Soon after committing these crimes, Milarepa’s joy at having aided his mother began to fade, making way for inescapable remorse. This transformation led Milarepa to seek out a master teacher.

“Milarepa’s life story shows how one can progress from being caught in the cycle of confusion, known as samsara, to becoming a student entering and practicing the path of dharma, to eventually becoming a teacher oneself and taking on the responsibility of training others.”

It was not long before Milarepa found Marpa the translator, a Tibetan Buddhist teacher. Marpa was able to see Milarepa’s potential, but knew that the young man would have to process his remorse and uncertainty before beginning his time as a student of the dharma. In order to guide him to a place of preparedness, Marpa set Milarepa to his legendary task of building, destroying, and rebuilding stone towers. This process was intended “to purify the negativity of his past actions, so that Milarepa could begin his studies with fewer obstacles.”

Marpa’s challenge pushed Milarepa “almost to the point of suicide before he agreed to take him on as a student.” Thus began Milarepa’s journey to becoming the yogi and poet that he is remembered as today. He began his simple, solitary lifestyle, living in caves. He often wore little clothing, even in the winter months, and became known as “the cotton-clad one.” Though he did not seek students, word of his practice traveled, and he was sought out by many. It is said that Milarepa “engaged with whoever approached him,” and it is through his teaching that his spontaneous songs and poetry were shared.

“Milarepa sang hundreds of such songs. The standard collection, The One Hundred Thousand Songs of Milarepa (Tib. Mila Grubum) is said to have been compiled by Tsang Nyön Heruka, the “Mad Yogi of Tsang,“ based on transcriptions of the songs that up to then had been only transmitted orally. In this collection, every song comes with a story about how it came about. The collection also includes many descriptions of how Milarepa worked with people, not only through song but in nonverbal ways. We can see how he interacted with his students and how he created situations that challenged them and woke them up. That is, Milarepa did not just sing [songs about] the dharma but he fully embodied the dharma. Because of that, he was able to teach freshly, spontaneously, and with great humor using a variety of skillful means.”

Milarepa’s poetic teachings have touched the hearts his of students and admirers for nearly a thousand years. His life represents that of an ideal Bodhisattva, as his deep compassion created the wish of Bodhicitta and motivated him to obtain Buddhahood for the benefit of all sentient beings.

The Song of the Snow

On this auspicious, glorious day,
You male and female benefactors who welcome me with
prostrations,
Along with myself, the yogi Milarepa:
We didn’t perish, and have met. Oh how joyful!
I’m an old man with a treasury of songs,
So I’ll answer your query of my health with this tune;
Listen carefully with focused, attentive minds.

At the very end of the tiger year
And at the beginning of the year of the hare,
On the full moon of the Wagyal month,
Disillusioned with the things of samsara,
I went seeking a secluded retreat
In the remote pastures of the Lachi snowy range.
The land and sky conferred together
And sent down a messenger, a strong wind.
With the elements of water and wind astir,
Black southern clouds gathered in front.
The sun and moon were put into prison.
The twenty-eight constellations were strung on a wire.
The eight planets were put into shackles by edict.
The great Milky Way was tethered down.
The morning star was completely wrapped in mist.
Wind with sleet blew, and finally,
Snow fell for nine days and nine nights;
With the days and nights together totaling eighteen.
The big flakes were big; they fell like thick layers of wool,
Like birds in flight that plummet down.
The small flakes were small; they fell like tiny wheels,
Like bees flying around, then dropping down.
Other small flakes the size of mustard seeds and beans,
Lumped together and fell like balls of sleet.
Snow fell in more sizes than one could count.

High above, the snowy white peaks touched the sky.
Below, the plants and trees were matted and pressed.
The mountains of black donned a blanket of white,
An ocean with waves that were frozen over.
The blue rivers’ waters were put in a shell.
The contour of the land was evened to a plain.
Because this snowfall was so great,
The black-haired people became socked in.
The four-legged creatures were stricken with famine:
Especially the old, weak ones’ sustenance was cut.
Above, the birds’ food source was depleted.
Below, the pikas and mice hid in their stores.
The meat-eating animals were unable to eat.

As for the fate of such sleet and strong wind
And particularly the fate of me, Milarepa:
That blizzard that came down from above,
The strong winter wind of the new year,
And I, the yogi Milarepa’s cloth, these three,
All fought on the side of the high snow mountain.
But I was victorious over the snowfall, and it melted to water.
Though the wind roared powerfully, it naturally subsided,
And my cloth, like fire, was blazing strong!
Two wrestlers contended there in a life-or-death match.
I gave it the edge of my kingly sword.
I was victorious in that fight where the valiant ones were
overthrown;
Thus, all dharma practitioners earned some clout
Especially meditators, twice as much;
In particular, my single chandali cloth showed its greatness.
The four gatherings of illness were put on the scale.

Then, inner disturbances were completely vanquished.
Both cold and hot pranas were fully cast out.
Later, the [elements] listened and heeded what was said.
The demon of snow and sleet was suppressed.
Then, all was resolved and completely still.
Though samsara’s brigade tried, it didn’t succeed.
Thus, this yogi won the fight.

Fate has once again played its joke.
If you trust that what this old man says has any power,
The practice lineage teachings will spread in the future,
A few siddhas will also come,
And I, the yogi Milarepa,
Will be renowned throughout the lands.
You disciples will have faith
And fame of you will later spread.

I, a yogi, am very well.
You benefactors, how are you? 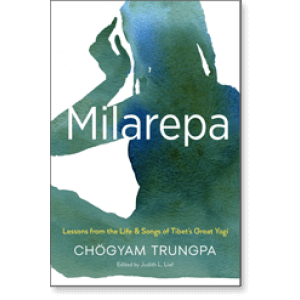 The Hundred Thousand Songs of Milarepa

By Tsangnyon Heruka and Milarepa
Translated by Christopher Stagg 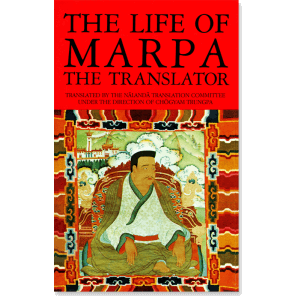 The Life of Marpa the Translator