Jim Scott’s life has, from its earliest years, been dedicated to the pursuit of the contemplative life, originally as a Christian monk at a Trappist monastery, then as a student of philosophy at St. John’s College, and finally as a student and practitioner of the Kagyu lineage following Khenpo Tsultrim Gyamtso Rinpoche around the globe of this earth for some thirty years.

When Khenpo Rinpoche first came to the West in 1977, at the request and in the company of His Holiness Rangjung Rigpe Dorje, the 16th Karmapa, Jim was fortunate to be in the original group of students to receive and follow Rinpoche.

At H.H. the Karmapa’s bidding, Rinpoche started and taught the first Kagyu Shedra for westerners with the intention, as expressed by H.H., to provide westerners with the same basic formal education in the classical Indian and Tibetan texts of Buddhadharma as in Tibet, and to train translators who could then be instrumental in communicating these teachings at the Dharma centers then springing up around Western Europe, North America and around the world.

In 1986, though continuing to teach around the planet, Rinpoche moved the main locus of his activities to Nepal and, in the early 1990’s, at the request of His Eminence Jamgon Kongtrul Rinpoche, he began to teach the Winter Philosophy Program and the Spring Meditation Retreat at Pullahari, Jamgon Rinpoche’s main seat.

It was primarily from here that Rinpoche encouraged representatives of Dharma centers worldwide to invite senior students to share with others what he had so carefully taught them.

Following Rinpoche’s example, the programs Jim pilots have the characteristic feature of being closely linked with the texts of the tradition, though at the same time seen through the eyes of an ordinary person from a western background.

All who have had the great good fortune of meeting Khenpo Tsultrim know that a special feature of his blessing transmission is his expression of the teachings in song. Jim Scott has played a central role in helping to make this possible in English. His dearest wish is to do whatever he can to help fulfill Rinpoche’s vision of song as a path of awakening heart.

Jim Scott, who has been a student and translator for Khenpo Tsultrim Gyamtso Rinpoche for over 25 years, is well known for both his translation work and hismusical compositions of the songs of Milarepa. He lives in Denmark, where he founded a Buddhist society inspired by both the 16th Karmapa and Kalu Rinpoche, and he teaches annually at Pullahari Monastery in Nepal,and in Europe and the USA. He recently published a translation of Maitreya’s Distinguishing Phenomena and Pure Being, (Snow Lion, 2004). 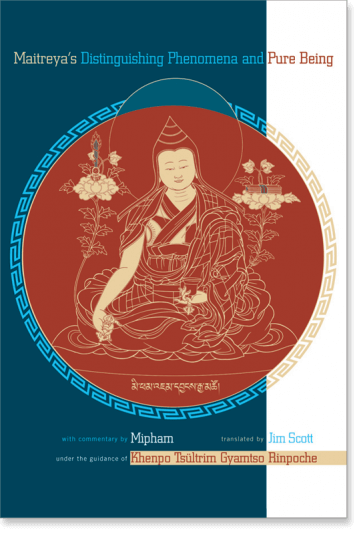 Maitreya’s Distinguishing Phenomena and Pure Being

Jim Scott learned “songs of realization” from Khenpo Tsultrim Gyamtso Rinpoche in the Tibetan tradition of enlightened masters such as Milarepa, Guru Rinpoche, and Götsangpa. At Rinpoche’s request, Jim translated these songs into English and gave them melodies. In this weekend teaching Jim teaches the meaning of the songs and then leads the group in singing them. He teaches that singing these songs is shamatha and vipashyana combined. Singing calms the mind and the words provide the opportunity to contemplate the meaning. Understanding that a realized mind is an awakened heart, he calls these Songs to Waken the Heart.

Jim also teaches from his soon-to-be-released translation of Distinguishing the Middle from the Extremes, specifically a chapter of that text called The Unsurpassable Vehicle. This text was composed by Maitreya, the coming Buddha, as taught to him by the Buddha Shakyamuni. In this text the Mahayana is taught as the Unsurpassable Vehicle with the Vajrayana being a component. The first verse of the text describes the content of the weekend teaching: “The practice is characterized by six traits [t]o be brought to bear in performing the paramitas.” These six traits are (1) its genuineness, (2) the mental cultivation it entails, (3) its harmonious trait, (4) its avoidance of extremes in the form of sets of opposites, (5) how the practice is specialized, and (6) how the practice is not specialized.

In the late 1970s, the 16th Gyalwang Karmapa, Rangjung Rigpe Dorje, directed Khenpo Tsultrim Gyamtso Rinpoche to found a shedra (institute for Buddhist studies) in Europe. There Khenpo Rinpoche educated Westerners in the classic Indian Buddhist and Tibetan Karma Kagyu Buddhist traditions. At the same time he taught these students to be translators of the Tibetan language. This activity was not only to preserve these traditions but also to make them available to Westerners for practice. Jim Scott was among the first group of translators at the shedra and he continues to be a senior heart student of Khenpo Rinpoche. At Rinpoche’s request, Jim Scott translated and put to melody many songs of realization. In addition, he has translated numerous Buddhist texts and teaches widely.